Please find below an excerpt from my review of Shiptown: Between Rural and Urban North India by Ann Grodzins Gold for Economic and Political Weekly To read the full review, please follow this link. 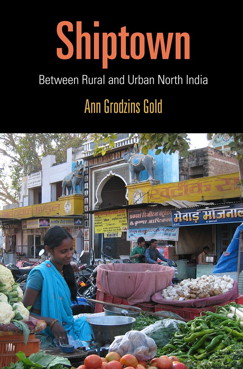 Shifting Identities of a Provincial Town

Ann Grodzins Gold’s Shiptown: Between Rural and Urban North India is an ethnography of a small town in provincial North India called Jahazpur. In the book, Gold carefully documents and analyzes the familiarity and kindness of everyday living practices that are derived from close proximity in living conditions when devoid of political manipulation. This is the larger argument of the book. Gold contends that places like Jahazpur do not have a static, fixed history. Rather, these places come into being through quintessential daily practices, processes, and patterns. As Gold notes, Jahazpur literally translates as “shiptown.” She describes shiptown as a “town in motion, a town as transport, a town providing specific form of transport linking rural with urban” (xi). In other words, Jahazpur is an in-between place. This thread of in-betweenness weaves its way throughout the book, seamlessly flowing in and out of pages, chapters, and sections, binding them together. Jahazpur also happens to be a qasba: a walled and gated town that has historically provided mercantilist and bureaucratic services in this part of the country. Gold argues that the qasba is a unique kind of north Indian place with its own peculiar characteristics that is often difficult to categorize. It is somewhere in the middle of the rural-urban spectrum, it is definitely both and not exclusively either. Jahazpur is also a market town, whose economic activity is kept lively and vibrant by this rural-urban interface.

There are two aims of Gold’s book. First, to provide knowledge about small-town life in provincial India by illustrating the differences between Jahazpur and its surrounding rural landscape. Gold argues that Jahazpur is a local hub where agropastoral farmers from the hinterland and traders from the town center interact. These two-way relational networks make it a “peopled place” (1).  Second, Gold aims to add to the burgeoning literature on ethnographic practice. She does this by providing an honest, reflexive account of her trials and tribulations in the field, and her dependence on the kindness of others to produce knowledge. Gold’s story about Jahazpur has eight interrelated but distinct chapters that have been divided into two complementary sections. Part I: Origins, Gateways, Dwellings, Routes, Histories aims to paint a colorful picture of life in Jahazpur through five different brush strokes. Each of these chapters adds a new intriguing piece to the puzzle of the place. Part II: Ecology, Love, Money begins to piece together this puzzle by highlighting various actors of the town—people, landscapes, built environments, markets, temples, and mosques—and how they coalesce to form the place we know as Jahazpur.

The theme of rural-urban interconnectivity and interdependence bleeds across chapters of the book. In chapter two, Gold uses the five and a half gates of the walled qasba as analytical frames of entry into her field site. She not only uses it to look within her field site, but also to reflect back on her own academic career in the US as these material gates become metaphoric, reflexive passages that intrinsically connect her ethnographic object of study with her professional subjectivity, thereby blurring boundaries between the two. Each gate offers bi-directional routes and lenses on everyday qasba life: the Royal gate refers to commercial passages, the Delhi gate to historical ones, the Bundi gate to sociological passages, the Mosque gate to pluralistic passages, the Hanuman gate to ecological passages, and the small window gate refers to ethnographic passages. She connects journeys through these gates with the quintessential passage between rural and urban lives of people in the town.

In chapter three, Gold offers a particularly compelling analysis of the gendered production of space in the suburban colony of Santosh Nagar in Jahazpur. Drawing on the work of feminist economic geographer Doreen Massey (1994), Gold argues that Jahazpur as a place is not made by a focus on a narrow, internalized history of the town. Rather, the place is (re)made by a coagulation of social relations, kinships, and ties forming together at a given time. It is not a static place, but something that is constantly forming, relational, and always becoming. What stood out most in this chapter was the close relationship Gold developed with her research participant and “friend,” Suman. Gold recognizes and acknowledges the role Suman played in developing a nuanced understanding of place, space, community, and gender in Jahazpur. She locates this unique relationship somewhere between friendship and intimacy, which she frames as an important element of her feminist methodological practice.

A striking part of chapter four is Gold’s analysis of the use of sound as an attempt to fill up public space in the town. Here, she analyzes religious festivals and parades as a public celebration of religion in the town’s streets and squares, which is generally a part of the private sphere in a secular state. Drawing on Uni Wikan’s (2012) concept of ethnographic resonance, Gold urges us to analyze meanings that are not necessarily embedded in language. Rather, she calls on social scientists to move their analysis beyond the spoken word by stressing on the importance of feelings and emotions, and the use of one’s own sensibilities to learn non-verbally. Jahazpur has historically been a place of religious pluralism, sustained tolerance, and mutual respect between the town’s Muslim and Hindu residents. Yet, we learn that these historic linkages are now being challenged and contested by the younger generation of the town’s residents who seem more susceptible to sectarian politics.

In Part II of the book, chapter six stood out for its analysis of environmental conservation efforts in the town and how it weaved together religious discourse. Gold analyzes the case of the town’s contaminated Nagdi river. Paradoxically, while the Nagdi remains polluted, two sacred groves of the town are protected and preserved. Findings from this chapter push back against romantic notions of close links between religious devotion and environmental conservation. Gold argues that in the case of Jahazpur’s sacred hilltops, environmental conservation is a mere side effect of religious piety. She draws on two points to make her case. First, she argues that religious devotion becomes an obstacle in preserving the Nagdi. Since sacred groves on hill sides belong to a unified religious community (Muslim or Hindu), they are easier to manage and preserve. But the river is common property that flows through both communities. Therefore, managing and preserving it requires coordination across religious barriers, which has been a difficult task. Second, the materiality of water, as compared to trees, makes its preservation more difficult. Trees and forests are easier to manage and protect, while flowing water proves to be a challenge.

Has the town set sail?

The book ends with a short epilogue that attempts to tie up the loose ends of Gold’s ethnography. As Gold suggests, Shiptown is not meant to be an exhaustive, all-encompassing account of daily life and practices in Jahazpur that make it the place we know today. Rather, Shiptown is an attempt to illustrate paradoxes and anomalies of life in a small town in North India that continues to breathe, live, and celebrate the differences of its inhabitants, much like the miraculous discovery of buried Jain images by Muslims in the town’s historic qasba (Chapter 5). Gold succeeds in this bold attempt to capture the textures and colors of everyday life in Jahazpur. The interesting thing about the town, as an object of ethnographic study, is its ordinariness. There is nothing unique or special about Jahazpur. It is an example of one of the many small towns scattered across the rural Indian landscape which account for more than 60 percent of India’s total population (Chandramouli 2011). Gold’s work has been successful in highlighting the creativity, plurality, and ideas of quotidian life in such a place. This is especially relevant today with onslaught of radical and divisive Hindutva political ideologies devised to break and polarize the religious plurality of places like Jahazpur. In this regard, the book makes a significant contribution to the growing literature on geographies of peace and religious cohabitation in places around the world, which remain scantly theorized in the social sciences. How provincial towns like Jahazpur and Varanasi (Williams 2015) respond to these malevolent, pseudo-religious political maneuvering will prove crucial in deciding where the Indian republic’s tryst with secular democracy turns to next.

However, Gold’s book would have benefitted tremendously had it been a few pages shorter. In particular, chapter seven, that engaged with the wedding ceremonies of Bhoju Ram Gujjar’s (her research collaborator) three daughters, could have been more succinct. Here, Gold practiced a mode of immersive participant observation in the wedding activities of the household where she is both a keen observer of rituals and ceremonies, as well as joyful participant in the proceedings. Her narrative style experimented with three modes of ethnographic representation: experience, which dealt with raw first impression field notes; chronicle, a recounting of selected rituals and events from field notes and interviews; and interpretation, where she provided analytical commentary on different aspects of the weddings. The thick ethnographic descriptions and diverse representational styles made it difficult to keep track of the main argument of the book. Additionally, a more robust epilogue or conclusion would have helped situate the chapters of the book by highlighting its connections with its core argument.

In conclusion, Gold provides a rich, textured account of an ethnographic practice, deeply situated in the peculiarities of Jahazpur without ever prescribing any specific methodological template. Shiptown is filled with juicy vignettes, captivating narratives, and colorful conversations as Gold documents, analyzes, and produces knowledge about life in Jahazpur in close partnership with her research collaborators, Bhoju Ram Gujar and his daughters. The book draws the reader into the heady, intoxicating mix of sights, sounds, smells, tastes, and materials that make up the town of Jahazpur, which sometimes feel overwhelming, but warm and welcoming nonetheless. Gold has been able to bring Jahazpur to life on these pages through lucid prose and a seamless flow of text. I would highly recommend this book to young scholars in the humanistic social sciences, particularly those interested in situated, reflexive ethnographic practice.

← Workshop: Third Annual International Anthropology of Concrete Workshop 2019, Rice University
Public: Decolonizing Infrastructure in India and the US: A Conversation with Malini Ranganathan →
My Tweets