Please find below an excerpt from my review of The Promise of Infrastructure by Nikhil Anand, Akhil Gupta & Hannah Appel (eds.) for The AAG Review of Books. To read the full review, please follow this link. 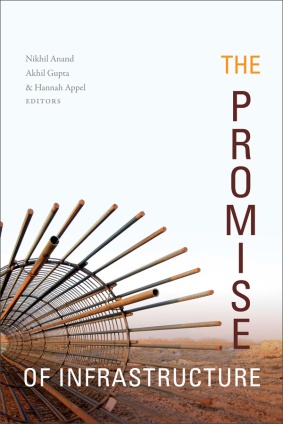 The Promise of Infrastructure contains the latest set of ideas to emanate from the “infrastructure turn” in anthropology and the social sciences and humanities more broadly. This edited volume contains highly generative articles by nine scholars who take the ethnographic study of infrastructural systems into new, exciting realms. For these scholars, ordinary infrastructures like roads, railways, water taps and meters, dams and bridges, electric wires, oil and gas pipelines, buildings, power stations, radio and media technologies are “dense social, material, aesthetics, and political formations” (3) that structure social life and produce experiences of difference and othering. As the editors Nikhil Anand, Akhil Gupta, and Hannah Appel state, the aim of this volume is to show how infrastructures shape and alter interpersonal relations to “make a variety of social, institutional and materials things (im)possible” (4).

The book addresses two primary questions. First, why has this turn towards an ethnographic study of material infrastructures taken place now? Second, what does an analytical focus on everyday infrastructures allow us (social scientists) to do? The nine authors in this volume have articulated answers to these questions in their own distinct but complementary ways, often drawing on detailed ethnographic research and rich historical analysis. The editors assert that a focus on banal infrastructure can defamiliarize and rethink established social, cultural, and political categories. By doing this, they hope to harness the potential of infrastructures to navigate and bridge pre-given divides such as rural-urban, South-North, society-technology, and nature-culture.

In the introduction, the editors identify three disciplines from which the current anthropological interest in infrastructural analysis arose: development studies, urban geography, and science and technology studies (STS). They note that, following WWII, infrastructural provisions emerged as a significant marker of cultural and technological development in the global South. Infrastructure became associated with both its material properties and its metaphoric meanings as roads and railways simultaneously carried people and goods and shaped modern aspirations and desires. The editors then highlight the unique distributional quality of infrastructures and their covert role in the production and differentiation of urban space and capital. These aspects have been studied by urban geographers like Graham and Marvin (2001), and McFarlane and Rutherford (2008). Within the rich, interdisciplinary field of STS, they acknowledge and build on the scholarship of historians and sociologists of technology, like Law (1987) and Star (1999), who have argued for a situated and relational analysis of infrastructural expertise and knowledge.

The book is organized into three interconnected thematic sections or “interventions” (8) of time, politics, and promise. In the first section, Hannah Appel, Akhil Gupta, Penny Harvey, and Christina Schwenkel urge us to think about the fluctuating temporality of infrastructure due to multiple frameworks and conceptualizations of time emerging from and within it. Drawing on ethnographic research in Equatorial Guinea, India, Peru, and Vietnam respectively, these persuasive essays prod us into theorizing infrastructural time as something that exists before, during, and after human time, as most infrastructures will outlive humans. Both Gupta (62) and Schwenkel (123) allude to this dynamic nature of infrastructural networks. As an ephemeral entity, it is constantly changing, always becoming, forever forming. Gupta (74) and Harvey (84) add that the reason we sometimes see infrastructures as solid and fixed is due to the hidden gendered labor and materials that go into maintaining it. They argue that highlighting this shifting temporality of infrastructure allows them to decenter anthropocentric thought while still highlighting the relational human connections that infrastructures assemble.

Penny Harvey’s chapter in this section was particularly striking due to her theorization of the paradoxical and dual nature of infrastructure. Drawing on ethnographies of two road building projects in the Peruvian Andes, Harvey argues that while infrastructural projects have traditionally been infused with singular, teleological histories of progress and modernity, they have multiple and open-ended futures. By this she means that while roads in Peru are designed and planned to act in certain ways, they rarely do so. This is due to the different motivations of multiple actors involved in their making, including state planners, engineers, and local people, as well as the materiality of concrete, and the harsh Peruvian landscape. Hence, for Harvey, infrastructures elicit paradoxical feelings of “hope and expectation”, but also “desire and fear” (82) due to the often complicated and unexpected consequences of these projects.

In the second section on politics, both Antina von Schnitzler and Nikhil Anand explore potent political meanings of common infrastructures. With an ethnographic focus on privatized water meters in South Africa and piped water systems in India, they draw our attention to the everyday practices through which simple material objects become effective means of political agency and redress. Drawing on technopolitical and biopolitical frameworks respectively, von Schnitzler and Anand argue that ordinary infrastructures are powerful sites for the theorization of contemporary politics. By following the distribution of piped water to Mumbai’s “hydraulic publics” (157), Anand offers a particularly compelling theorization of the materiality of Mumbai’s water technologies. Anand argues that the local state gets its biopolitical legitimacy and power through claims and contestations made by Mumbai’s marginalized people for domestic water use. Yet, the materiality of this megacity’s water system—its creaking pipes, its leaking taps, and its dissipating water pressure—makes it difficult for the state to act in its intended ways thereby limiting and compromising its authority.

The final section on promise includes three essays by Brian Larkin, Geoffrey Bowker, and Dominic Boyer addressing aesthetics and form, knowledge, and the revolutionary potential of infrastructure respectively. Larkin points to the many conceptual dimensions of infrastructure that operate simultaneously at differing levels (196). In the previous section, von Schnitzler also alluded to this multilayered and multivalent nature of infrastructural networks that make it a rich site for ethnographic study (134). Here, again, one sees the bleeding of concepts across sections like that of the relational quality of infrastructure. Bowker’s analysis of the long-term sustainability of knowledge infrastructures in the academy leads him to argue that, “infrastructures are always relational” (203). In a similar vein, Penny Harvey notes that infrastructures are an “exemplary relational form” (83) that spark contemporary debates about (non)human agency, material politics, development practices, contested ontologies, and situated knowledges. The book ends on a rather hopeful note with Bowyer’s chapter on infrastructural revolution. Bowyer eloquently and strongly urges the readers to think of the emancipatory promise of infrastructure. His chapter tells us to arm ourselves “against the Anthropocene and the modernity that made it” (226) by focusing on local, small scale, decentralized initiatives across the world. Optimistically, he ends his piece and the book by saying, “do what you can to help” (240).

It is at this point that the volume errs slightly on the side of naïve optimism. After all, how can the same carbon endowed infrastructures trigger revolutions that will save us from the Anthropocene that these infrastructures helped create in the first place? This logic seems circular. Boyer suggests that designs and prototypes of revolutionary infrastructures already exist and are based in localized practices and interventions. While this might be the case in a global North context, it does not seem to hold true in other parts of the world. My own ethnographic research on house construction practices in India suggest that Boyer’s “revolutionary infrastructures” (239) might easily be (mis)understood as a romantic call to adopt “primitive” techno-systems such as dry-compost toilets, eco-friendly building materials like mud and bamboo, and traditional rain-water harvesting mechanisms. These technofixes certainly reduce carbon intake but also (re)produce familiar, old ways of differentiation and discrimination. Surprisingly, Boyer himself alludes to this danger earlier in the chapter, but it seems to have been drowned out by the optimistic deluge of end.

Additionally, the book would have been strengthened if editors had further clarified their strong stance against giving primacy and distinctive existence to materials that form the skeleton of infrastructure. While they accept that materiality and ideology (co)produce infrastructures, they refuse to give political agency to materials as proposed by new materialists likes Bennett (2010), and Coole and Frost (2010). In articulating his position in this regard, Brian Larkin argues that materials are part of a mutually reciprocal relationship with meaning and metaphor together combining to form infrastructures that have both form and political aesthetics (179).  While Larkin recognizes that technologies and infrastructures possess a material excess that is sometimes beyond human discursive limits, he dismisses the idea that this material excess exists prior to or before human consciousness. Larkin illustrates this point by drawing on opposing theories of new materialism and historical materialism (197).  At this juncture, it would have been theoretically interesting to engage Raymond Williams’s conceptualization of “cultural materialism” (1977). An extended discussion of the different materialisms—historical, cultural, and new—would have greatly benefited Larkin’s argument and the editor’s overall theoretical position in the book.

In conclusion, The Promise of Infrastructure is a timely and compelling account of the myriad ways in which infrastructures can be theorized and the limits and potentials of the same. As the authors note, “where we think from and what we think about affects what is it we are able to think” (14). “Thinking from and with infrastructure” (14, emphasis added) offers a much-needed postcolonial impetus to the study of social life. It enables the postmodern decentering of humans from the study of the social by re-centering that analytical focus to relations and networks that form contemporary society. Infrastructures are an apt embodiment of these complex relations and networks. As the editors argue, the turn towards an ethnographic and historical study of infrastructure permits “new and productive decenterings and provincializations” (14). For them, “infrastructures are promising locations for ethnographic research precisely because they are sites of conceptual trouble that refuse the easy separation of the human and the material” (27). I would strongly recommend this book to scholars of infrastructure studies and technological systems across the broad realm of the social sciences and the humanities.